The Colour of History

This week I thought it was time to revisit my main thesis. This has absolutely nothing to do with my hectic Christmas drinking schedule impinging on my reading time.

For those who haven’t read all of my posts (you inconstant swines), I hypothesised in August that there are 3 main attributes that make a person memorable: hotness, eccentricity and violence. By scoring each property on a scale of 0-255 and converting to RGB colours codes (red = hotness, green = eccentricity, blue = violence), historical personages can be defined by colour.

I’m not sure that the colours illuminate any deeper historical truths, but they sure are pretty and I am beginning to identify some interesting patterns. 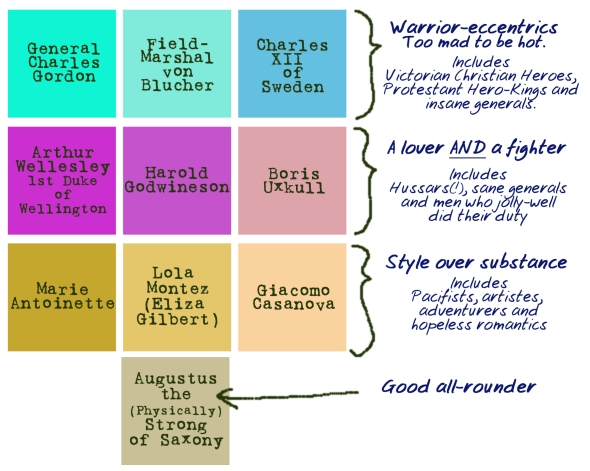 Captain Magenta may not have been gay after all.

1.  All the best men have strong tendencies towards magenta. I am now having to redefine this colour in my own mind as manly and not remotely associated with women’s sports wear or 80s eye shadow.

2. While I am naturally drawn to the violent and the sexy, I have a sad disinterest in the peacefully mad. Not one of my ten personages is predominantly green. Further research is required here, but I suspect the green spectrum encompasses religious fanatics, philosophers and ugly poets.

3. Matching together complementary colours opens the possibility of using memorability spectrum analysis to determine personal compatibility. As you can see, Lola Montez and Charles XII would have got on like a small principality on fire.

While some may question the usefulness of a historical dating service for the dead, I would point out how many dead people are long-term single. Gordon, Charles XII and Casanova never married and a quite shocking proportion of historical personages are widows and widowers, having tragically lost their spouses to decomposition and lack of memorability. 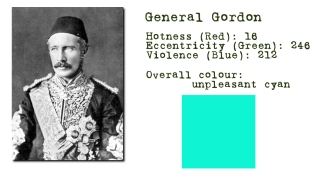 Gordon’s only friend was Jesus, and even he didn’t like him that much on account of all those people he shot.

Colour compatibility matching also explains why Gordon didn’t have any friends – cyan goes with absolutely no other imaginable colour.

4. In applying memorability spectrum analysis to historical figures, I’ve inadvertently created ranking lists of the hottest, maddest and most violent people in history. Here are the rankings as they currently stand. 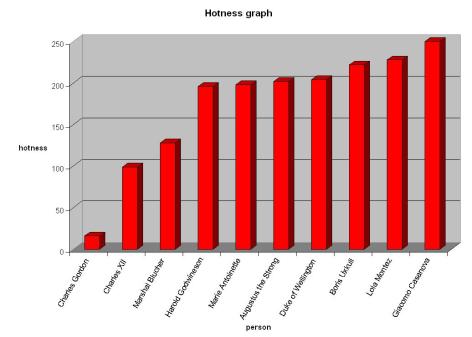 As you would expect, the hotness chart is topped by the infamous Casanova with roughly 122 confirmed kills. Exotic dancer and statesman Lola Montez is in second, and ungallant hussar, Boris Uxkull has galloped into third place. Uncharacteristically, Charles Gordon and Charles XII are bringing up the rear.

Those who score low for hotness, tend to score highly for eccentricity, thus showing that madness and romantic achievement are often mutually exclusive. Gordon wins by a short head over Blucher, owing to the transitory nature of the Field-Marshal’s phantom pregnancies. Casanova makes a surprise appearance in third – there is a point where extreme womanising and madness collide. 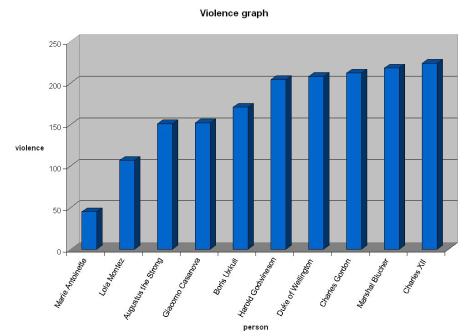 Though usually a well documented attribute, violence is difficult to assess – is it about personal physical violence or total head count resulting from actions? Taking both aspects into account, it is unsurprising that warrior-kings and crazy generals win this category. So far, historical women are dismally pacifistic, largely due to the leading of armed hoards being unfashionable for ladies in the 17th-19th centuries. The education of women in the noble arts of stabbing, shooting, raping and starving people to death was also much neglected. Few were taught even the basics of punching people in the face.

I intend to continue gathering data on this theory in the hope of creating a pretty, but useless coffee-table book for Christmas 2015. If anyone has a particular favourite historical person* they would like analysing, do let me know (religious fanatics, philosophers and ugly poets are of special scientific interest).

*I only really countenance European history between 700 and 1918. Everything else is obscure, irrelevant, American or current affairs.

15 thoughts on “The Colour of History”