Charles XII vs My Gran

Ever since I can remember, my Swedish grandmother has been referred to within the family as “Karl den Tolfte” – a nick-name that all Swedes think is terribly funny. Hoping to learn more about my gran, I set out to investigate Charles XII.

Here is an informative introductory video about King Charles, of which you only need watch the first 50 seconds.

A brief history of Charles XII

Similar hairline to my brother, but not my gran.

Charles was born during a violent storm in 1682, and (like most babies?) emerged into the world with his “hands dripping in blood”. A normal, healthy boy, he liked shooting bears, playing with his toy cannon and pretending he was Alexander the Great.

Charles became king when he was 15. Sweden was then the big cheese in Northern Europe, and her enemies saw the accession of a boy king as an invitation to get out the crackers and open the port. This was the start of the Great Northern War which would perversely rage across Eastern Europe until 1721.

Vowing “never to begin an unjust war, but never to end a just one, save by the subjection of the enemy,” Charles, aged 18, set out to defend the Empire.

Denmark was swatted aside within six months using a huge rolled up newspaper filled with 10,000 Swedish troops and the British and Dutch navies. 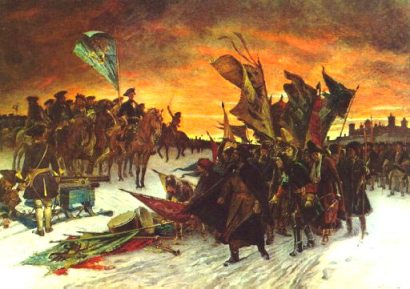 The Battle of Narva, where the Russian army abandoned its standards.

Next was Russia, who under the leadership of Peter the (not yet) Great had invaded Swedish Estonia and besieged Narva with around 35,000 troops. Thinking that Charles would not possibly attack with his paltry 8,000 men, Peter popped home to check on the dogs, when Surprise! Charles attacked under cover of a snow storm, smashing the Russian centre and eventually winning by 667 casualties to 12,000 (though some of these drowned and so only count for half). The Russian left wing of 12,000 men was made to ceremonially lay its arms and standards at Charles’s feet, just to rub it in.

Unfortunately, Charles did not follow up the victory against Russia, as Augustus the Strong, King of Poland was now also in need of a good kicking. Having chased Augustus round Poland and Saxony for a number of years, Charles at length managed to wrestle the Polish crown out of his unnaturally meaty fingers in 1706.

In the meantime, Peter the (now very nearly) Great had reformed his army, occupied Swedish Ingria and founded St Petersburg. Charles immediately set out for Moscow (very slowly, due to the unreasonable number of rivers, bogs and harsh winters in his way), reaching the Russian frontier nearly two years later.

Mazepa tells Charles that if only he had read about Napoleon and Hitler’s campaigns in Russia, all this could have been avoided.

The two armies eventually met at Poltava in June 1709. The day before the battle, Charles was shot in the foot and could not take his usual strategic position at the very front of the vanguard. In the hands of less god-like men, the 14,000 Swedes were embarrassingly routed by a mere 45,000 Russians, the Swedish prisoners being put to work on building St Petersburg and the remaining 1,500 escaping with Charles to the Ottoman Empire.

It was roughly at this point that Charles went all Alexander the Great and simply refused to go home. A weird little Swedish enclave formed around him in Moldavia subsisting off huge loans from the Sultan. After five years of attempting to persuade the Turks to invade Russia, Charles was driven out by a popular uprising of his many creditors.

Charles died with his boots on. These boots here.

Having stayed perfectly still for five years, Charles decided to make up for lost time by riding the 1,430 miles back to Swedish Pomerania in just 16 days. When he arrived, his legs were so swollen that his riding boots had to be cut off.

Attempting to salvage some glory from the ruins of his shrinking Empire, Charles unsuccessfully invaded Norway in 1716 and again in 1718. During this second attempt, he was shot through the head, and after struggling on obstinately for several seconds, finally had to admit that he was dead.

This is my idea of a good, romantic funeral.

1. Indifference to physical pain. As a child, Charles liked to sleep almost naked on bare planks to simulate campaigning. Worried that he looked child-like he deliberately got sunburned and was ecstatic at any scars he received, even from small pox. He appeared immune to pain, remarking when he snapped his thigh in 1702, “nonsense, it will soon be alright again,” even though the bone was sticking out. During the operation to remove bone splinters from his foot just prior to the Battle of Poltava, he seized the knife from the surgeons and finished it himself while receiving dispatches from the front.

2. Harder to kill than John McClane in an airport. Charles liked to give people (and animals) a fair chance of kill him back and insisted on leading dangerous attacks in person. He liked camping close to the front line – so close that at Thorn a cannonball passed through his tent, flying across the dinner table as he was getting up. His other hobbies included bear hunting, which at first he did with a gun, then later with a spear, and eventually with only a wooden cudgel. He also loved falling off horses, driving sleighs too fast, and is credited with making the first (superbly dangerous) artificial toboggan run. All this led to the belief that he was unkillable.

3. Practical jokes. In his youth, Charles and his naughty cousin Duke Frederick IV of Holstein-Gottorp liked to amuse the court by holding hare hunts in the council chambers and betting on who could sever the neck of the largest animal with one blow, throwing the heads generously from the palace windows onto people below. Charles also enjoyed knocking the wigs of court officials, riding on stags and getting bears drunk.

4. Dirtiness. According to the British envoy to Poland, he was “a tall, handsome gentleman, but immoderately dirty and slovenly… [he wears a] nasty old leather waistcoat and breeches, which, they tell me, are sometimes so greasy they may be fried.”

Charles XII in 1917. Bet he was pleased with that scar.

5. Mysterious death. Though enemy fire seems most likely, some people believe Charles was murdered by his own side. Legend (and my mum) has it that a disaffected Swedish soldier who wanted to finally go home, shot him with a button, it being generally believed that the king was immune to bullets.

Charles was dug up in 1746, 1859 and 1917 by those attempting to settle the matter, but all that is certain is that a projectile managed to pass right through his head and out the other side, utterly ruining his hat. You can get all the ballistics data and crazy theories in tedious detail here.

As far as I know, my gran isn’t immune to bullets (though this is untested) nor does she go out of her way to get herself killed. She does enjoy a good practical joke, but this doesn’t extend to riding ruminants. She certainly doesn’t have an issue with personal hygiene and has never been assassinated – not once.

I would hypothesise that her similarity to Charles XII is a matter of character. The most common word associated with Charles XII is “obstinate”. His obstinacy is in fact, legendary, as is my gran’s. Just as, as a child, Charles once declared that blue was black, and never admitted he was mistaken, so my gran once determined that we would go to the shops and refused to get out of the car until someone drove her there.

In fact, despite his personal awesomeness and popularity with 19th Century romantic nationalists, most Swedes seem to think Charles was a bit of a dick. If he had used his military successes to sign sensible peace treaties, instead of marching thousands of young Swedish conscripts across Europe to die on his personal mission to own Russia, Sweden might have become a mighty European power instead of the pedlar of cheap furniture and socialist ideals it is today.

Memorability spectrum analysis:
Hotness (red): 99. Though tall and handsome, Charles’s appalling personal habits and constant campaigning kept the ladies away.
Eccentricity (green): 192. Very sensible and professional in some areas, but obsessions with conquering Russia and cheating death push him towards the crazy end of the spectrum.
Violence (blue): 224. Difficult to find a more war-like soul or effective slaughterer of numerically superior armies.

3 thoughts on “Charles XII vs My Gran”